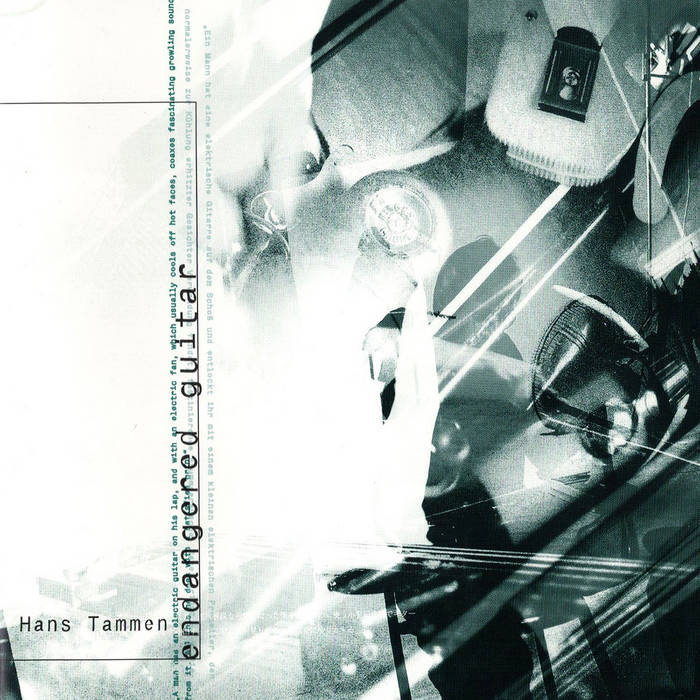 …tortured noise scrapings, an alien world of bizarre textures, hard-to-believe sounds escape from my stereo, the bowing of metal resting on top of vibrating guitar strings, a yanked out tape measure violently squished against the same strings, a journey through the land of unending sonic operations and an infinite index of metals. (Bruce Gallanter 1999)

Charlie Christian and Les Paul knew they were on to something, something new and perhaps revolutionary, but they could hardly have imagined the things that Hans Tammen does to the guitar, and the sounds he coaxes from it. (Brian Marley, Avant Magazine 2001)

Hans Tammen could assay the lead role if there was ever a guitar version of Silence of the Lambs or American Psycho. (Ken Waxman, Jazzweekly 2001)

Until the balance of the world´s corrupt zoologists calling themselves guitarists learn how to breed their charges in captivity, Tammen is one of the few gatekeepers we should trust with the keys. (Bananafish 2000)

His use of the Ebow redefines the gadget. [Endangered Guitar is] fresh, lively, varied and thoroughly interesting. Highly recommended. (François Couture, All Music Guide 2000)

Dan Warburton, Signal To Noise 2000
In its burnished metal box it looks like an old Unit Moebius Belgian techno album, or something from Berlin’s Chain Reaction label, but put this on at your local rave party and you’ll see the ecstasy-addled kids really trip out.. “Endangered Guitar” (fond memories of Maarten Altena’s bass-bondage on the old ICP album “Handicaps”) is forty-seven minutes – twenty tracks, the longest 4’22″ – of white-hot solo guitar work from German-born (now resident in the US) Hans Tammen. Tammen is old enough to tell you that his favorite guitarist is Richie Blackmore, and he apparently started playing guitar horizontally on his lap while Fred Frith was still knitting socks for Henry Cow album covers [oops, that´s wrong, I started the lap thing around 1995... HT] – but unlike that other old hand at table guitar, AMM’s Keith Rowe, who paints vast desolate landscapes of Feldmanesque delicacy, Tammen’s music shatters and splinters in all directions, molten shards of noise relentlessly pelting the inner ear (if like me you can only listen to music like this through headphones for fear of provoking eviction and/or divorce, you’ve got a hell of a thrill coming..). It’s all executed – that is the word – with clinical precision, and it kicks ass.

Don’t be fooled by that Richie Blackmore line though: apart from a few effects boxes there’s little to reveal Tammen’s fondness for rock (though in wilder moments I like to imagine that Robert Fripp and Brian Eno could have come up with this if they’d been doing speedballs and angel dust back in 1975 instead of (no) pussyfooting..). Recent years have seen a slew of fine free guitarists emerge, from the ubiquitous O’Rourke to Alan Licht to Leonid Soybelman, but nothing they’ve done so far packs this kind of punch, and Uncle Pat Metheny’s occasional forays into noise (either solo or with Derek Bailey) pale into insignificance. In terms of sheer technical innovation (as ever, it’s hard to believe this could have been recorded in real time), let alone sonic inventiveness, “Endangered Guitar” is, for my money, up there with Bailey’s 1970′s solo albums and the early extreme Eugene Chadbourne stuff (recently reissued on Rastascan).

Those of you who missed out on the Statements Quintet’s “The Cat’s Pyjamas” (Leo Lab 054) last year might want to check out Tammen in an ensemble context (with Ursel Schlicht, Dominic Duval, Jay Rosen and Christoph Irmer), and his work on German reedman/composer Martin Speicher’s “Erdtöne” (Hybrid) is well-worth hunting down. A duo album with Denman Maroney is due out later this year on the French label Potlatch, but if you’re coming to Hans Tammen for the first time, this is where you should start. Buy now or cry later.

Richard Cochrane, Musings 1999
The sleeve notes mention “stringency”, and there’s something in that word to describe Tammen’s very individual approach on this lovingly-packaged, well-documented solo disc. Tammen, who will be known to many readers from this year’s widely-acclaimed Statements Quintet album, takes an almost monkish approach to his instrument, a precision and asceticism which makes “pure sounds” his goal. What’s surprising, if that’s the case, is how good-natured, entertaining and, yes, how musical it all is.

Nur/Nicht/Nur specialise in “experimental sound productions”, and owner Dieter Schlensog has said that he is unsure whether what he releases on the label is music at all. Tammen certainly doesn’t play tunes, if that’s the sort of thing Schlensog is thinking of. Laying his guitar flat, he “plays” it with an electric fan, violin bows, stones, cymbals and the rest of the now rather familiar repertoire of guitar extentions. That kind of approach is often associated with a search for richness, a kaleidescopic range of timbral effects, employed in the interests of self-expression, which is, however, not what’s happening here.

The very fact that this is a solo disc, with only three (out of twenty) tracks using overdubs, gives away some of the eremitic simplicity of his vision. These sounds don’t create a nice sensual texture or a solo against an accompaniment. No, they stand on their own, as inscrutable as the little piles of stones in a Zen garden. It’s no wonder the sleeve notes also refer to this as a “collection”, a “catalogue” of sounds. But this is no dry technical handbook, no report of Tammen’s sonic discoveries, or at least it’s not simply that.

In order to understand this, one has to accept that there is an aesthetic of the catalogue, the unadorned list, the presentation of objects without narrative. Think of Perec’s “La Vie, Mode d’Emploi”, or the lists which proliferate in “Finnegans Wake”, or think of Damian Hirst’s sculptures like “Against the Tide” which collect objects and present them, as if in a museum, only stripped of any didactic intention or informational content. If there can be a beautiful elegance in the spartan collection and presentation of objects supposedly without style, without finesse, then that aesthetic also extends to Tammen’s “Endangered Guitar”, a lovely simplicity which, like all simplicity, is complexity in disguise.

The pieces themselves — most of which are fairly short — generally take a guitar setup and run with it, producing sounds and developing them in deceptively straightforward ways. The result is bewitching. What sounds as if it’s going to be an okay-in-small-doses record, crammed as it is with fairly nasty scraping, piercing high frequencies and percussive noise, captivates you and won’t let you turn it off. It’s astringent, yes, but the clarity with which Tammen works infuses the whole thing with a lightness which just keeps you listening. In a year which has already seen quite a few really excellent solo guitar releases (Gilbert Isbin and Roger Smith, to name but two very recent ones) “Endangered Guitar” stands comfortably alongside them. Very highly recommended.

Go here for an interview with Cycling74: cycling74.com/2008/09/15/an-interview-with-hans-tammen-endangered-guitar/