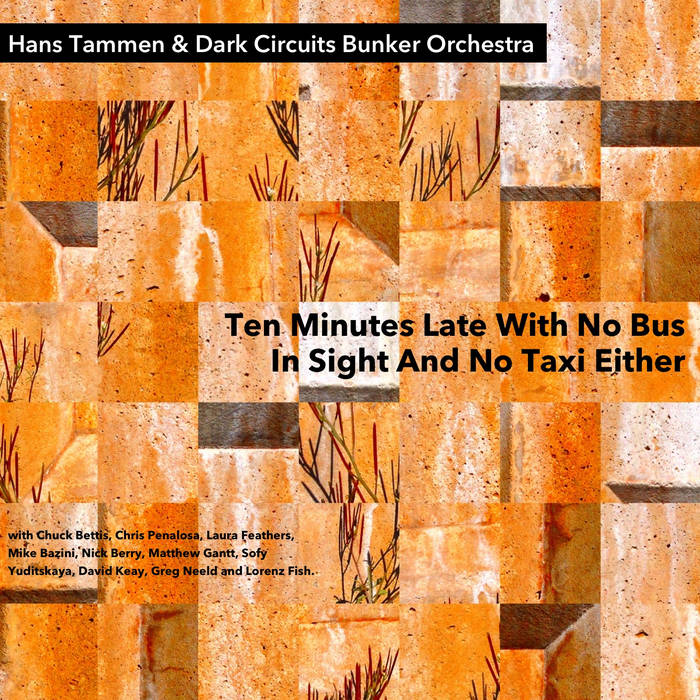 Hans Tammen has conducted and written for large ensembles of electronic instruments for way over a decade. In June 2016 he led an ensemble of performers primarily using modular synthesizers at CultureHub in Manhattan as part of Make Music NY. This collaboration proved so fruitful that those involved determined it ought to be preserved for posteriority, and went to a studio to record it. “Ten Minutes Late With No Bus In Sight And No Taxi Either” represents a focusing of the initial musical impulses of this group, the Dark Circuits Bunker Orchestra, which features Chuck Bettis, Chrystal Penalosa, Laura Feathers, Mike Bazini, Nick Berry, Matthew Gantt, Sofy Yuditskaya, Greg Neeld and Lorenz Fish, adding David Keay on drums, with Hans Tammen using Earle Brown’s open form conducting idea to direct and shape the music.

Artwork by Rob Keay - cargocollective.com/rob_keay_art
Produced by Laura Feathers
Titles are from poems by Richard Brautigan, and from Michail Bulgakov’s Master and Margarita.

---
The Answer Is In The Beat
Lengthy compositions played by a gigantic orchestra of synths (including Euroracks, a random tone generator, and a modified Moog Etherwave Theremin) as well as some very unhinged, impulsive drumming. Tammen is credited with “concept, composing, binary conducting”. There’s clear guidance to these recordings; it’s obvious that someone is telling the musicians when to be calm and when to explode and go crazy. When the drums get manic and the synths swell and saturate, it all provides an ultraviolet head rush. Probably the best track overall is “Kafka’s Hat”, a pretty thorough mix of heavy rhythms, musique concrete-like synth-work, and outer space overdrive. “Black Magic and Its Full Expose” is nearly 18 minutes, and interrupts interstellar voyagery with brief moments of far out, frenetic drumming which could’ve been recorded at some sort of carnival. The whole album is highly inventive and never predictable, and sounds like it was spontaneously created by humans in love with the possibilities of technology as well as intense, sprawling rhythms.
theanswerisinthebeat.net/2018/02/10/hans-tammen-dark-circuits-bunker-orchestra-ten-minutes-late-with-no-bus-in-sight-and-no-taxi-either-gold-bolus-2017/
---
Vital Weekly
But I can’t think of any other ensemble of comparable size. So, in that sense it is unique what we are witnessing here. ‘Ten Minutes Late With No Bus In Sight And No Taxi Either’ consists of six works. In total about 63 minutes of electronic escapades. Spacey atmospheres dominate in ‘Poker Star’.‘Kafka’s Hat’ is a beat driven excursion with a prominent role for drummer David Keay (early collaborator with Moore and Gordon in pre-Sonic Youth times). What makes this one special is first of all, its unique sound spectrum built up from numerous electronics instruments. I enjoyed it for the wave of sounds, strange sequences and constructions of different electronic sounds.
Full Review www.vitalweekly.net

If you like Ten Minutes Late With No Bus In Sight And No Taxi Either, you may also like: