Balance Of Power - for LEMUR Guitarbot 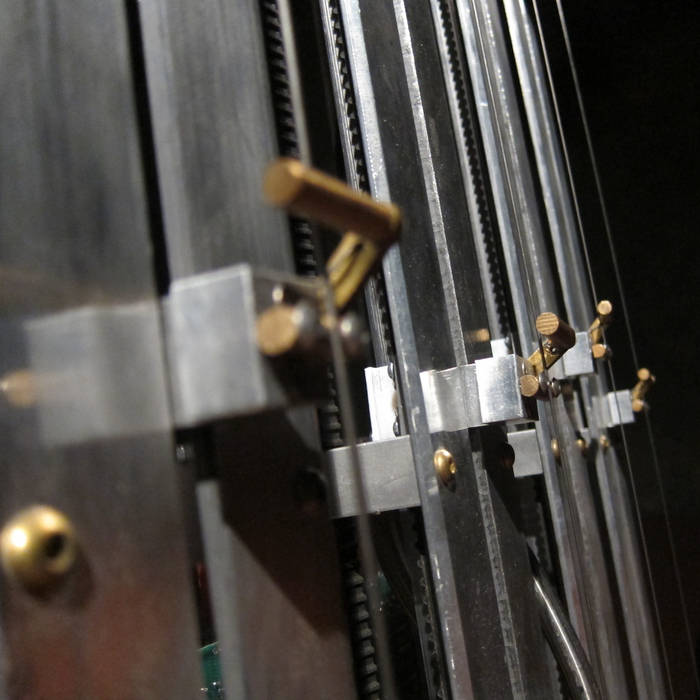 The LEMUR GuitarBot (www.lemurbots.org), a collection of four MIDI-controlled monochords built by Eric Singer, is a beautiful soundsource, especially when also recorded with microphones to capture all the mechanical noises that surround it.

Primarily I set the computer to algorithmically generate two kinds of sounds from the robots. First the scraping sounds of the slowly crawling frets, and second those from crashing the frets vigorously against the bridge. The third sound – a high pitch you hear throughout the piece – comes from the circuit boards, picked up by the microphones. These sounds feed in turn the computer processing unit (basically a modified version of my Endangered Guitar software), which again converts them into MIDI information to play the robots.

This feedback loop can go on for a while, and what you hear is a multi-channel recording of the guitar pickups, several microphones and computer processing channels, mixed down to 5.1 surround. The piece has three movements, occasionally I interfere with the balance of power to give it a new direction, until at the end, as usual, that balance gets out of control.

The original piece is in 5.1 Surround Sound, making extensive use of the spatialization of sounds. The piece was presented on surround sound installations and presentations in the US, Germany and Bulgaria.

This version is a stereo mix / recomposition of the 5.1 piece.