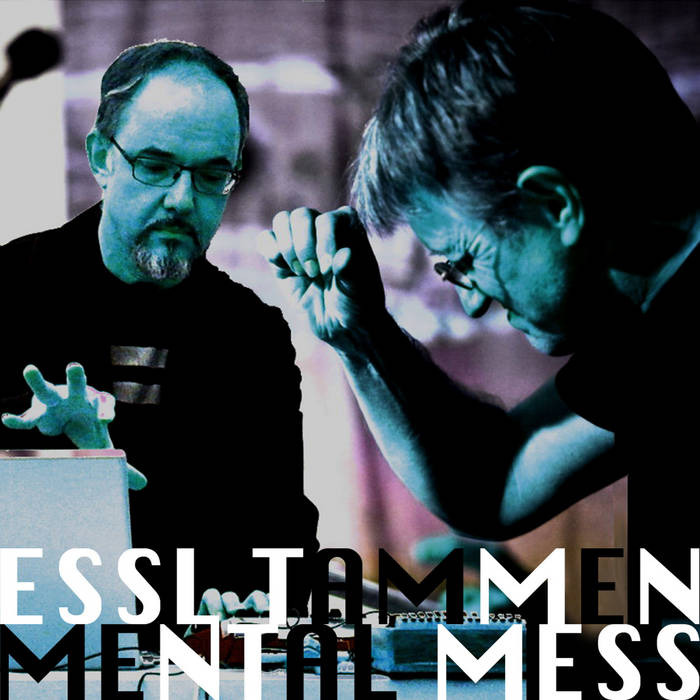 On May 7th 2010, Austrian composer Karlheinz Essl and New York-based guitarist Hans Tammen met for a recording session at Harvestworks in New York City. Without any preparation or prior consultation, both musicians created this music in the spirit of free improvisation, connecting themselves in order to form a higher unit out of their individual sounds.

As sophisticated sound experimenters become more comfortable with the variety of expressions that can be extracted from computer-based electronics, high-quality sessions like MentalMess are the result. These eight tracks, recorded in one afternoon at Manhattan’s Harvestworks centre for evolving technologies, are completely improvised using the sonic sources engendered by New York resident Hans Tammen’s self-defined endangered guitar plus Vienna-based composer Karlheinz Essl’s m@ze°2 Max/MSP software instrument.
More intrinsically, the key to creating stimulating sounds like these isn’t what theories are proven or which electronic gizmos are attached. It’s how profound, inventive and thought-provoking the end product is. In this case Tammen and Essl, who jokingly titled the session with a contradiction of their names rather than a definition of their emotional state, generate dazzling interactions.

A track such as “Prelock” for instance, begins with what could be effervescent spurts and watery drips resulting from bottle opening, with the tones then pulling back to reveal reed-like snorts and tongue stop-replications plus purported cymbal slaps and keyboard pressure. Crackling static presages what could be an abrasive thunderstorm which oscillates, judders and finally fades. Meantime, while “Friggle” mixes an approximation of downwards slithers of a toy slinky with guitar strums, mouse-like squeaks and half-heard melodies, “Kalister” is more percussive and less playful. Harsh twangs from electric kalimba cut through the blurry interface to isolate string snaps and vibraphone-like resonations. Another highpoint is “Nomisola”, built around staccato drones, as snatches of piano, double bass and even full orchestra samples intermittently reverberate. Until the finale, blustery synthesis intercuts between instrument replications and nearly impenetrable grinds.

Both improvisers create while using software programs that sample while processing, with the sample themselves often manipulated as well.

Tammen’s endangered guitar is an interactive hybrid between guitar and computer that processes in real time as sounds are created, with added control sources a proximity sensor and an iPhone’s accelerometer data. For his part, Essl’s m@ze°2 uses a keyboard, a mouse, several MIDI controllers and a webcam to pan, harmonize, pitch-shift and transpose samples from a database, mixing them with what he and Tammen create in real time. Omnipresent is an ostinato of glitches, static and clicks.

As this session evolved, it gradually dawned on the players that the interaction was breeching further sonic definitions. Essl’s electronically created samples for instance seem to derive from so-called real instrumental tones, while Tammen’s guitar intonation has an unmistakably electronic feel. The Austrian, who often speaks of “the magic of the moment”, appears comfortable, conscious of references, yet negotiating a method of real-time playing.

It’s the same for German-born Tammen. Conceptually he has concerns about defining improvisation. He’s discomforted by players who say they’re creating original sounds when merely recreating so-called improvisations they’re played before. At the same time he distrusts arbitrary playing which gives the improviser too many choices. “The more experienced you become in your playing, the more you conclude that there are really only one, or at most two, perfect choices for any given musical situation,” he declares.

That’s what happens with MentalMess and why so many fruitful inventions are exposed here. Although in the past both Tammen and Essl have collaborated on an irregular basis, with this session they’ve achieved matchless technical and sonic unity.

Recorded live at Harvestworks (New York City) on May 7th, 2010.
Editing and mastering by Hans Tammen. No overdubs.