Intersecting A Cone With A Plane 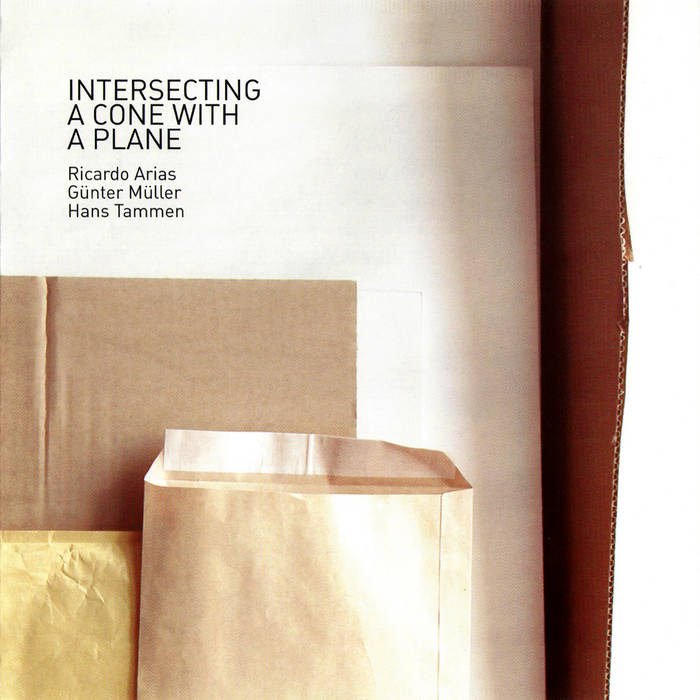 A disc/sound installation that show some of the characteristic and representative signs of current trends in improvised music of a European type, a work in progress that I personally consider one of the best ones of its kind that I have heard in 2006. Eduardo Chagas (Jazz e Arredores).

From the same label is Intersecting a Cone with a Plane, featuring a fascinating trio comprised of Ricardo Arias (bass-balloon kit), Günter Müller (selected percussion, mini-discs, iPod, electronics, processing), and Hans Tammen (endangered guitar). It’s a subtle record, with two long improvisations bookending a shorter one. Müller continues to become ever more exacting in his creation of templates and frames, though this way of thinking inaccurately consigns him to background gestures. With very little fat or excess, he can set the tone for groups in ways that are both recognizable and elusive: an abstracted percussive rumble or the most distant sine sizzle. Tammen plays with near self-abnegation here, a crackle, a detuned E-string, a rough bludgeoning every so often. And who really knows which sounds Arias produces – likely the wet squiggles and sawing. Together they come up with some very stimulating stuff: an insect colony plugged into a massive generator in your backyard, a ringing loop like a snippet of Rosy Parlane or Fennesz blared out from a passing car, a resonating metal braid coming undone, or a black electric cloud courtesy of Tammen’s lovely glinting bow work and the delicate, woody chorus from Arias. Another good one. (Jason Bivins, DustedMagazine)

Cone’s three tracks are of a piece, with Müller’s buzzing electronics providing the base upon which intermittent flanges, squeaks, ruffs and creaks predominate. With balloon scraping and friction a secondary leitmotif, chirpy rubs and timbral smacks announce themselves as distinctive tones, polyphonically intersecting with Tammen’s knob-twisting distortion and blasts of cylindrical flanges, as well as Müller’s motorized thumps and ratchets.
Intermittent electronic drones, inflating latex hisses and focused string slaps distinguish the tinctures of “The Congruence of Triangles”, the more-than-22 minute final track. Slipping in-and-out of aural focus, the fluttering individual piezo pick-up vibrations partially define the landscape. So do squeaking and dipping rubber resonation and triggered percussive whooshes. As the mechanized sound becomes more opaque, these thick tones reach a climax of looped thunder-like explosions. With the cylindrical motorized pulses lessening, foot falls, scraped glass-like pings, triggered crackles and static stutter and warble until the pitches vanish. (Ken Waxman – Jazzword.com)
Inhabiting the realm of live electroacoustics, this trio recording fully illustrates its zeitgeist through an encounter of extended instruments, various electronic processes and objects through the superimposition of transparent layers of an overt textural inclination that keep surfacing as others recede. (modisti.com)

With only a handful of peculiar and talented artists, it almost becomes embarassing to write reviews, since everything they do seems to be blessed with an uncommon degree of excellence. Günter Müller surely belongs to those chosen few, and every recording of his, be it solo, duo or ensemble, has both a costant quality and an individual mark; in the case of collective improvised performances, it’s also stunning how his electronics, or drumming, merge with the other players while maintaining their own filigree. “Intersecting a Cone with a Plane” features Müller at his usual set of “assorted percussion, mds, ipod, electronics, processing”, Arias at a mysterious “bass-balloon kit” and Hans Tammen at an equally puzzling “endangered guitar” – one of the few cases when I wish there was a live photo to understand what the hell they were playing… Anyway, the three tracks, recorded in New York in 2003, are an exhilarating texture of sharp and pointed sounds, crackling electronic particles and controlled feedback, and some lower rumbles – possibly the bass-balloon thing? While not overtly harsh, and full of subtle details, it sounds like a slo-mo recording of something boiling over, a free jazz record melting through fainted tapes and blown circuits. (Eugenio Maggi, ChainDLK.com)

The music was recorded in 2003 in New York and is simply great. Largely electronically sounding, this is an album of intense fields of sound, charged with electricity, small explosions on the guitar (an endangered species perhaps) and all sorts of sounds balloons can produce. The best release so far. Frans De Waard (Vital Weekly).

On this excellent release Ricardo Arias plays a bass-balloon kit (“a number of rubber balloons attached to a suitable structure and played with the hands and a set of accessories, including various kinds of sponges, pieces of Styrofoam, rubber bands, etc”), Günter Müller is featured on his customary selected percussion, mds, iPod, electronics and processing and Hans Tammen mangles his “endangered” guitar. You’ll search in vain for a wall to bash your head against, blood pummelling your temples into a dull ache, as huge rumbling bubbles host a gathering of a million squeaking mice against a backdrop of earthquake and thunder. Cybertermites munch their way through your floorboards over a Jackmanesque wave of harmonics and low-frequency interference, irregular convulsions perched nervously above Tammen’s extra-terrestrial tampoura, and the music crumbles and splinters into a cauldron of earth loop and suffocated volume swells. Your padded cell has been invaded by a battery of radioactive rats, tiny irregular heartbeats amplified in sickening, Chernobyl-like oppression. Don’t try to understand. Massimo Ricci (ParisTransatlantic).

Squid’s Ear – Darren Bergstein
“…Dancing about architecture,” the phrase usually attributed to Frank Zappa regarding music writing, feels more apt when describing this superb electroacoustic improv outing by three musicians who certainly know their way around a space…. Regardless, the trio makes mincemeat of the architectonic habitué where they were sequestered (Harvestworks, in New York City), erecting a bracing noise that comes at the listener from right angles, across fibrous surfaces, situated at reference points inhabiting countless alien cartographies.

Certainly the disc title leaves little mystery about the artist’s intentions; rather, the mystery resides in how each improviser deems what is necessary to flesh out the stark sonic arithmetic inherent in the title’s phraseology. Wow and flutter become vital components, particularly as the group dynamics of “A Spherical Triangle” announce themselves directly in the opening seconds. Amid Müller’s synthetic buzzes and flurry of effects and his few well-parsed snare taps, Arias emits some of his own calibrated squeaks, while Tammen makes the landscape appear even more brittle thanks to the warring cries of that aberrant guitar. Actually, as the piece gains momentum and the sparks fly (figuratively and literally), it’s difficult to discern who is responsible for what; in such a sound world, where the elliptical plane is never quite glimpsed because of the artist’s constant blurring of the emergent, one either tries to second-guess what arises, or simply succumbs to the quicksand-like morass on display. It’s a wholly immersive nexus of events that the trio build upon, as electronic burps and blips shimmer, tensions flare briefly, the shapes mimed out take hold.

The shorter “A Lune” is far more visceral, and a bit less cerebral, than its predecessor, as if Arias, Müller, and Tammen felt the burning embers and aural crackles of their ideas (some of which is wrought by Tammen’s preening strings, making their presence quite tangible amidst Arias’ high-pitched wheezings) became oxygenated enough before raging out of control. The finale, “The Congruence of Triangles,” probes its spatial dimensions and latent geometries much like the first piece: Müller churns out some sharply edited backwards-grooves out of his mini-discs; Arias giggles his way through a thorny bed of rubbery prongs and blisters; Tammen sends shivers along his fret board to splash messily all over Müller’s digital flatbeds. Electricity curls along every contour and vector the trio navigates, asymmetrically devised, brilliantly executed.

Recorded at Harvestworks, New York City, March 26, 2003
Mixed and edited by Günter Müller during the summer of 2003
Design By Carlos Santos
Production by Ernesto Rodrigues